On April 4, 1997, Pope John Paul II honored the Cathedral of Saint Louis by making it a Basilica, a place of worship of special distinction. As a Basilica, the Cathedral displays two special symbols-the tintinnabulum or bell and the ombrellino or umbrella. 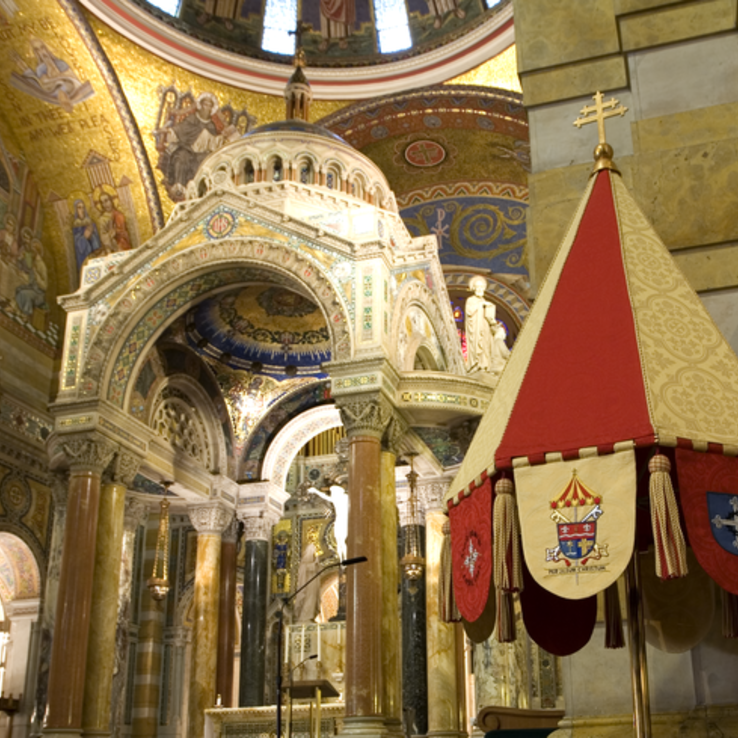 The word basilica is derived from a Greek term meaning “royal house.” In the Catholic world, a basilica is a church building that has been accorded special privileges by the pope. There are two kinds of basilicas. The world’s four major, or papal, basilicas are St. John Lateran, St. Peter, St. Paul Outside the Walls, and St. Mary Major, all in Rome.

The Tintinnabulum - one of the three physical signs of a lesser basilica.

Minor, or lesser, basilicas are significant churches in Rome and elsewhere in the world that meet certain criteria and are given special ecclesiastical privileges. Minor basilicas are traditionally named because of their antiquity, dignity, historical value, architectural and artistic worth, and/or significance as centers of worship. A basilica must “stand out as a center of active and pastoral liturgy,” according to the 1989 Vatican document Domus ecclesiae.

Because designation as a basilica indicates a special bond of communion with the pope, the parish must celebrate “with particular care” the feast of the Chair of Peter on Feb. 22, the solemnity of the Holy Apostles Peter and Paul on June 29, and the anniversary of the pope’s election or his inauguration into his pastoral ministry.

More than 1,580 churches worldwide have been honored as basilicas. As of last year, 325 basilicas had been designated in the Americas; there are now 69 in the United States.

Three physical signs indicate that a church is a lesser basilica. The first is the presence of the conopaeum — a silk canopy designed with stripes of yellow and red, traditional papal colors. The second is the tintinnabulum, or bell. It is mounted on a pole and carried processionally, along with the combrellino, at the head of the clergy on special occasions. Third, minor basilicas have the right to display the papal symbol—crossed keys—on banners, on furnishings, and on the seal of the basilica.

In addition, the basilica’s rector may wear a black mozetta, or cape, with red piping, buttons, and buttonholes in the exercise of his office.