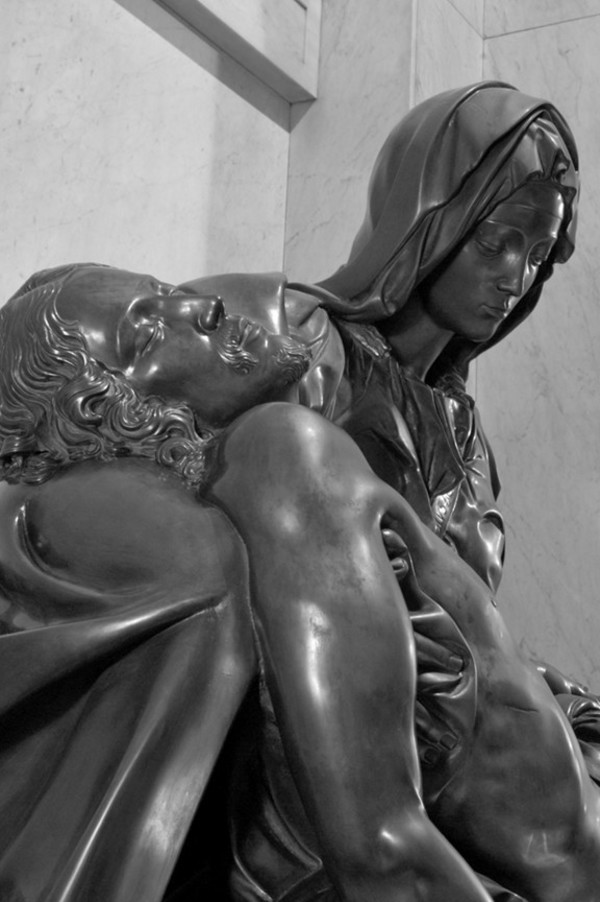 It is with great pleasure and honor that the Archdiocese of St. Louis has been chosen to exhibit an incredible piece of artwork at an equally incredible venue, our very own Cathedral Basilica of Saint Louis.

Located in the vestibule at the base of the stairs leading to the Blessed Sacrament Chapel, we will be exhibiting a life-sized replica in bronze of Michelangelo’s Pietá for a limited time. Please take a moment to view this masterful and inspirational work of art.

A History of Michelangelo’s Pietá

(as taken from the writings of John T. Spike, noted historian of Italian art of the fifteenth through the eighteenth centuries)

When Michelangelo completed the Pietá in 1499, he was 24 years old and the premier sculptor in Italy. Though he lived to be almost 90 and carved sculptures of inimitable force and compassion, Michelangelo never again achieved the sublime expression of the Pietá. The Pietá was commissioned by Cardinal Jean de Villiers de la Grolaye, an aged Benedictine, who sought a monument for his tomb at St. Peter’s Basilica in the Vatican. Jacopo Galli, a Roman banker and one of the sponsor’s who commissioned the work on behalf of Cardinal de la Grolaye, wrote: "Michelangelo will complete the said work within one year, and that it shall be the most beautiful work in marble to be seen in the Rome today, and such that no master of our times shall be able to produce better.” It took Michelangelo two years, not one, to complete the Pietá, but in all other respects, the claims made by Galli were without doubt fulfilled by the remarkable work of art.

The scene of the Pietá, in which Christ’s body is placed across his mourning mother’s knees, is not mentioned in the Bible, but during the middle ages was cited as one of the “Seven Sorrows of the Virgin”. The serenity of Michelangelo’s interpretation is a departure from the prior tradition. Our deepest feelings are touched by the sight of Christ, as if in death he has again become a child gathered up in his mother’s arms. Her expression is mild and contemplative, and the Savior’s torso and limbs are smooth, hardly showing the mark of his sufferings. This rendition reflects Michelangelo’s training in Renaissance philosophy, based on St. Augustine’s teachings, that held that “God is beautiful, beautiful on heaven and earth…beautiful in the arms of his parents…beautiful in leaving this life and in retaking it; beautiful on the Cross, in the tomb, and in heaven (Augustine, Expositions on the Psalms) It was Michelangelo’s genius to embody in a sculpture his personal longing for the purity and divinity o God. In this Pietá, where others had seen only tragedy, Michelangelo found immortality.

Fernando Marinelli is the grandson of the foundry’s creator for whom he was named. In 1919, the senior Fernando Marinelli opened his doors in Rifredi on the northern edge of Florence. Nearly a hundred years later, Fondoria Artistica Fernando Marinelli is the unchallenged producer of artistic quality bronze replicas of statuary. Through the twentieth century, as the city of Florence protected its heritage by transferring the sculptures from the open-air into museums, the Marinelli foundry has always been the preferred foundry for the casting of replicas to take the place of the original treasures. The monumental bronze is one of twelve bronzes cast by the Marinelli foundry from plaster molds taken directly from the pristine original marble in the Vatican in 1932. With the Foundry mark Fuse Fernando Marinelli Firenze and numbered N. 4/9, the monument was cast in 1982, in the collection of Galleria Bassanti 1982-2005, and sold to New Renaissance Art Corporation in October 2005.

The special exhibition of the life-sized replica in bronze of Michelangelo’s Pietá was inaugurated with a private viewing and reception at the Casa Buonarroti in Florence, Italy in April 2007. Casa Buonarroti, the world’s only museum dedicated exclusively to Michelangelo, is situated in a palace constructed in the 17th century by the artist’s heirs and is now a private foundation, museum, and library as well as the largest single repository of Michelangelo’s original drawings, letters, and personal papers.

Currently, this is one of two pieces being exhibited in North America and is on loan from the owners, Legacy Sculptures and Renaissance Sculptures, LLC, whose efforts on making bronze casts more widely available will certainly result in a wider knowledge of the original masterpieces as well as assist in the preservation of these many priceless and renowned sculptures. And it is with great honor we here at the Cathedral Basilica find ourselves graced with this inspirational work of art.