It is the work of each generation to offer gifts to the Lord and to assist in the spiritual growth of the faithful through sacred works of art and architecture. Yet, how should one encourage devotion to the Sacred Heart of Jesus witin the magnificent Cathedral Basilica of Saint Louis? 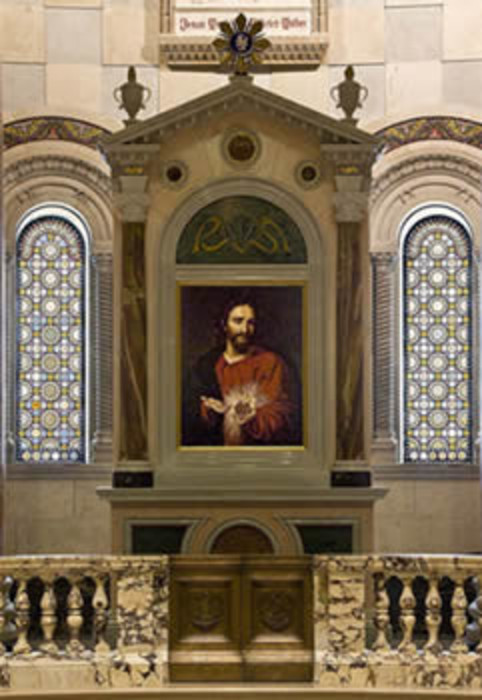 Given the extraordinary and majestic design of the basilica, the richness of materials, and quality of artwork this is no easy task. First, there had to be consideration of a prominent and appropriate location for a shrine to our Lord. After considering a number of locations, it was decided that the left transept had an area suitable for the sacred image and would balance with the baptismal font. Research shows that George Barnett, the original architect for the cathedral, had the intention of placing equestrian statues of Saint Louis and Saint George in the transepts surrounded by bronze statues of the twelve apostles on marble pedestals. Our aim was much more modest, though no less important, to build a shrine for the image of the Sacred Heart in the mother church of the Archdiocese.

Working with His Excellency, Archbishop Burke, a great variety of shrines and side chapels within the Cathedral were examined. In studying this great work of architecture we were in awe of the great variety of marbles, mosaics, symbols, and architectural elements with find their place within. The focus of the new shrine of the Sacred Heart is a mosaic produced by the esteemed Mosaic Studio located in the Vatican. The mosaic is based upon an original oil painting, presumably by a Spanish artist in the Nineteenth century, owned by the Archdiocese.

The design of the shrine is free standing with a pediment to give it verticality and prominence within the colonnaded apse. A series of architectural elements act as frames which set apart and visually enlarge the three by four foot image. An arch of white carrara marble surrounds the mosaic with an image above the crown of thorns, three nails, and cloth to allude to Christ’s suffering for humanity. The columns are like sentinels and are construrted out of diaspro marble from Sicily, a fragile and rare marble beloved by artists such as Bernini. The column capitals are composite and are inspired by the captials at the Cathedral high altar with a cross, fleur de lis and Lamb of God as part of their design.

Under the richly carved pediment, which stands twelve and half feet above the floor, there are three circles or tondi made out of volcano red and Pakistan dark onyx with gold mosaic bands. Above the pediment are two urns (inspired by the ceiling mosaics) with flames of marble symbolizing the burning love of Christ for his children. At the apex of the shrine is a bronze and azul image of the monogram of the Holy Name or IHS surrounded by gold rays. The marble walls of the shrine are rosa portogallo with a slightly darker variant under the altar. The altar has panels of verdi isorie and nuovo brocatello surrounded by bands of red mosaics an bianco carrara frames. The aisle side of the shrine has simplifed marble banding with an inlaid coat of arms of Archbishop Burke as the patron of the shrine.

The botticino classico floor matches other shrine pavements in the Cathedral and has a geometric pattern which frames the altar using statuario, portoro, rouge du roi, and gallo siena marbles. The central circle is star of David, remembering the faith of Abraham, Isaac and Jacob for which Christ is the completion and the erferring to Our Lady who is the synagogue, because she bore the Word within her. The curved altar rail of arabescato violetto creates a threshold tothe shrine and provides a place to kneel and pray. The bronze doors feature bas reliefs of a pelican feeding her young with blood from her breast, symbolic of Christ’s Eucharistic sacrifice. The complement the peacocks, symbols of immortality, at the Cathedral sanctuary.

In total, approximately thirty different marbles and onyxes, pieces which weighed up to six hundred pounds, were employed in the design to reflect the rich variety of marbles found in the Cathedral. The scagliola columns, black marbles bases and warm natural colors of the transept walls, Stations of the Crossand confessionals surround the Sacred Heart Shrine. The marble fabrication and carving along with the bronze casting was supervised by Roberta Pagliari in Carrara and Pietransanta Italy. The marble, which has a concrete substructure, was erected by Chad Meyers of Stone Renaissance in Saint Louis in ten weeks.

Cardinal Burke on Devotion to the Sacred Heart